NOTE: B2107 is an SAE, manufacturer specific code ( all B2XXX codes SAE defined as manufacturer specific ) that is used by many car makers to indicate a fault in the front windshield wiper control circuit. However, due to make and model-specific differences in wiper control systems, the information in this guide is presented for general informational purposes only, and should therefore NOT be used in any diagnostic or repair procedure that involves code B2107. ALWAYS refer to the relevant technical manual for the application being worked on, or refer the vehicle for professional diagnosis and repair.

OBD II fault code B2107 is (mostly) defined as “Front Wiper Motor Relay Circuit Short to Vbatt” and is set when the PCM (Powertrain Control Module) detects a short circuit in the front windshield wiper control circuit. Not that “Vbatt” refers to “voltage battery”, meaning that the wiper control circuit is shorted to the positive battery terminal.

When the wiper control switch on most vehicles is activated, the switch energizes an electromechanical relay that connects the wiper motor directly to the battery. This relay is a normally open, heavy-duty switch that is forced to close, and thus complete the circuit by the action of a coil that creates an electromagnetic field to force the high current contacts to close. Thus, for as long as the coil is energized, the high current contacts will complete the circuit between the battery and the wiper motor.

This contact will only be broken when the coil is de-energized, allowing a small spring to pull the high current contacts apart. The advantages of using a relay lies in the fact that relays are better able to cope with high amperages, thereby protecting the delicate contact points in the wiper control switch on the one hand, and that several high-current circuits and/or components can be activated simultaneously with a single low current switch, on the other.

When a short circuit occurs in the relay control circuit, the coil might be activated permanently, meaning that the wipers could work even if the control switch is not in the “ON” position. However, depending on the application, and where in the circuit the short occurs, the relay could be damaged, or prevented from closing, which means that the wipers might not work.

NOTE: On many applications, such a VAG vehicles (Volkswagen Group) the wipers are not controlled by a relay. Instead, the wipers and other electrical functions are controlled by an electronic control module that may, or may not be incorporated into the PCM, depending on the particular application.

The image below shows the construction of a typical 12 volt automotive relay. Note the position of the coil in relation to the high current contacts. 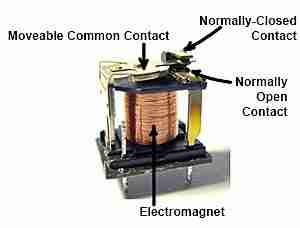 What are the common causes of code B2107?

Failure of the wiper control switch is a common cause of code B2107. Other possible causes could include-

NOTE: This list of possible causes of code B2107 is not exhaustive, nor definitive. There may be make-and-model specific issues that could cause code B2107 as the result of failures of related systems and components. Consult the manual for the application being worked on for details on possible (and probable) causes.

Apart from a stored trouble code and an illuminated warning light (wiper icon), the most common symptom of code B2107 is that the wipers don’t work. However, depending on the application and the location of the short circuit the wipers might work permanently, which could require that the battery be disconnected to disable the wipers.

Other possible symptoms could include:

How do you troubleshoot code B2107?

NOTE: Due to the large number of different wiper control systems in use today, it is impossible to provide specific diagnostic and repair information for all applications. However, the basic operating principles of wiper control are much the same on all relay-controlled systems, meaning that it should be possible to diagnose and repair most instances of code B2107 with the information in this guide.

Nonetheless, do NOT attempt a diagnosis and repair of code B2107 without also consulting the repair manual for the application being worked on. Failure to consult the relevant manual could result in a misdiagnosis, or worse, secondary damage caused by incorrect fault finding procedures.

Consult the manual to determine the location, function, color-coding and routing of all wires in the relay control circuit, and perform a thorough visual inspection of all associated wiring. Look for blown fuses, damaged, shorted, burnt, and corroded wiring and connectors, especially between the wiper control switch and the wiper relay. Note that since code B1207 refers to a short circuit in the relay control circuit, it is unlikely that the fault will be in the circuit between the relay and the wiper motor, although in some cases, a short circuit between the relay and the battery could set code B2107. Note that in these cases, other codes, both generic and model specific, relating to the electrical system in general is almost certain to be present as well.

Short circuits are not always visible, so if no visible issues on the wiring between the wiper control switch and the wiper relay is found, perform resistance, ground, system voltage, and continuity checks on all wiring in the relay control circuit. Be sure to disconnect the control switch from the system before starting resistance and continuity checks.

Compare obtained readings with those stated in the manual, and make repairs as required to ensure that all readings fall within the manufacture’s specifications. Note that the relay itself forms part of the circuit, and as such, the resistance of the energizing coil must be checked as well, since the short circuit may have damaged the relay. Replace the relay if the resistance reading does not fall within specification. Retest the wiring after a relay replacement to ensure accurate test results.

WARNING: DO NOT apply direct battery current to any pin or circuit unless you have a complete understanding of the circuit you are testing. Consult the manual on the correct way to test the circuit; if there are no such instructions, it should be accepted that the circuit cannot be tested with direct current, and it should therefore NOT be attempted to prevent damage to other circuits and components.

Once repairs are complete, clear all codes and operate the wipers to verify that they work according to specification. However, at this point it is always a good idea to take amperage and voltage readings at various points in the circuit to confirm that there are no overloads or other issues still present in the circuit. The manual will have specific instructions for this, so be sure to follow all directions exactly to avoid accidental short circuits that could destroy the system again.

Also be sure to follow the instructions regarding air bag reintegration if the steering wheel had been removed. It is likely that the SRS (airbag) warning light will be illuminated after reconnecting wiring/connectors, so follow the directions in the manual to ensure that the airbag is recognised by its controller(s).

NOTE: Depending on the application, it is entirely possible for several warning lights (apart from the SRS light) to be illuminated after the wiper control switch had been replaced. Since procedures to extinguish warning lights vary between applications, be sure to follow the directions in the manual exactly.

NOTE: Although many, if not most car makers have assigned code B2107 to a short circuit in the wiper relay control circuit, there are notable exceptions to this. Below are some details of other definitions for this code-

BAT Team Discussions for B2107

None found. Ask a question about B2107.
0 0 votes
Article Rating
Subscribe
Login

HI, MY VAUXHALL CORSA HAS A FAULT CODE B2107-C HAVE YOU ANY IDEAS WHAT THIS MEANS?

Looking around, it seems like the Corsa has some issues with the wiper motor and wiper motor relay. Basically, this code is telling us that the BCM detected a short circuit in one of the relays, which might also be in the wiper motor itself.

I think the easiest way to test this might be to swap one of the wiper relays with a known-good relay, perhaps a starter relay or turn signal relay, as long as they match. It has to be a five-pin relay for testing. If the wipers function properly with the “new” relay, then you can safely assume that the relay has gone bad (there are two on your vehicle for the front wipers). If the relay swap doesn’t help, then it has to be a circuit problem in the wiring or in the wiper motor.

I’ve posted an image I found of the wiper circuit that might help.