OBD II fault code B1676 is a manufacturer-specific trouble code that is defined by carmakers Ford, Lincoln, Mercury, Mazda, Jaguar, and Mazda as “Battery Pack Voltage out Of Range”, and is set when the PCM (Powertrain Control Module) detects an abnormal battery voltage.

NOTE: It should be noted that the definition “Battery Pack Voltage out Of Range” could be confusing, if not downright misleading. In generally accepted automotive jargon, a “battery pack” typically refers to a series of batteries that are connected to form a “pack of batteries” such as the high-voltage battery packs one finds in hybrid and electric vehicles. In practice though, this code is used by some manufacturers to refer to the two batteries found in some pick-up trucks with large diesel engines, hence the tenuous reference to a “battery pack”. The reasons for the inclusion of the word “pack” in some resources are not clear, though.

Nonetheless, in most resources and databases maintained by carmakers that have assigned code B1676 to battery voltage issues, code B1676 is defined as “Battery Voltage out Of Range”, without reference being made to a battery “pack”.

There are many examples of trouble codes that seem to indicate problems with a particular part, system, or component, when in fact, the code refers to something else entirely, and in the case of code B1676, the confusion around the wording of its definition extends to the problems it has come to describe.

Code B1676 is a good example of how some codes have ambiguous meanings; on the surface, code B1676 appears to be related to low battery voltages on the vehicle makes listed above, when, in fact, it refers to faults, failures, malfunctions, and defects mainly in the ABS braking systems of these vehicles. Here is how it works-

One of the requirements of an advanced ABS braking system is that it should be supplied with a constant voltage/current that is maintained within a range of minimum and maximum allowable values to reduce the possibility that the operation of associated systems such as Stability Control, Traction Control, Adaptive Cruise Control, Electronic Brake Distribution, Accident Mitigation, and others can be affected negatively.

As a practical matter though, fluctuations that are large enough to trigger code B1676 are almost invariably caused by malfunctions and/or defects in failing or failing ABS control modules or in less-than-perfect associated wiring, as opposed to being caused by damaged, defective, or discharged batteries that are impeding current flow to, or through one or more systems/components such as the ABS control module and associated safety systems whose correct operation depend entirely on the ABS module working correctly.

Where is the B1676 sensor located? 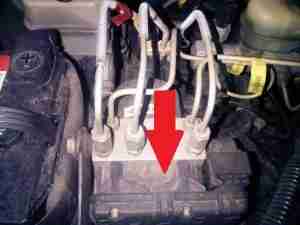 This image shows the appearance and location of the ABS pump/control module on the Ford Ranger truck; note the location of the ABS unit relative to the battery (to its left) in this view. Note that while this particular ABS unit is easily accessible, this is not always the case on many vehicles listed here. In some cases, the ABS pump may be squeezed in between the engine and the firewall, and it may sometimes be necessary to remove or disassemble unrelated components to gain easy access to the ABS pump.

Nonetheless, in terms of appearance, all ABS units follow the general pattern of this example, which makes it easy to locate the unit, if not always easy to access it for purposes of testing and/or removal.

What are the common causes of code B1676?

NOTE: While defects and malfunctions in the ABS system are the most common causes of code B1676 on listed vehicles, defects, failures, and malfunctions in batteries and/or the charging system can also cause this code to set. Therefore, it is recommended that the batteries and the charging system be tested to confirm or eliminate these issues as the root cause of the code.

Nonetheless, typical causes of code B1676 are largely similar across all listed applications, and could include one or more of the following-

Common symptoms of code B1676 are much the same across all listed applications, and could include one or more of the following-

BAT Team Discussions for B1676

None found. Ask a question about B1676.
3 1 vote
Article Rating
Subscribe
Login

I have 2008 Ford Explorer and last night when I was driving on freeway the track control light abs light and buzzing sound come on then radio when of all the lights fog lights and emergency flashers radio and door locks pup up and down didn’t work for a moment it happened a few times so this morning also abs was on now track control still on buzzer comes on. Got abs codes c1991 and b1676 battery voltage out of range I replace pcm alternator battery throttle body I don’t know what’s going on can you help dealership can’t find the problem