OBD II fault code B1352 is a manufacturer specific code that is defined by carmakers Ford and Jaguar as “Ignition key-in – circuit failure”, and is set when the PCM (Powertrain Control Module) detects a malfunction or general failure in circuits that are active when the ignition is switched off, but while the key is still in the ignition. Note that the most commonly affected circuits are those that feed power to the door chimes through the ignition switch.

While having door chimes that alert a driver that the key is still in the ignition while the doors (or any single door) are/is open is a good idea in principle, the actual chimes and their control circuits are notoriously unreliable and prone to failure, and especially so on Ford applications.

While many drivers regard the door chimes as a major nuisance, their purpose is both to prevent drivers locking the vehicle with the key in the ignition, as well as to serve as a warning that one or more doors are not fully closed and latched while driving above a predefined speed.

However, failures in door chime circuits often cause short circuits that can, and do, drain batteries, which can cause no-start conditions and in cases where the battery drain is severe, the total or partial loss of vital programming in one or more control modules, including the PCM.

Where is the B1352 sensor located? 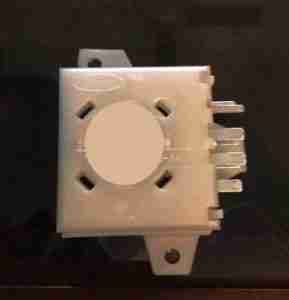 The image above shows a typical door chime, such as might be found in almost any Ford application. Note that while the actual location of the chime varies between models, it is most commonly located behind the dashboard, close to the steering column.

What are the common causes of code B1352?

Some common causes of code B1352 could include the following-

NOTE: Code B1352 is also used by General Motors, who defined this code as “Device ground #2 (chassis ground #2) Circuit Low”. In this definition, the code refers to a fault in a chassis ground point/circuit that relates to a specific device, system, or component in the application’s electrical system.

BAT Team Discussions for B1352

None found. Ask a question about B1352.
0 0 votes
Article Rating
Subscribe
Login

well that explains it ,i ripped that door chime out 10 years ago !!

This is the error code that exists in my 2000 F-350 4×4 7.3L Diesel 4×4. I have been trying to resolve two problems. 1st my cruise control doesnt work and 2nd, the Overdrive Off but doesn’t work. Any help will be greatly appreciated, I already changed out the 2nd break off switch on master cylinder.

P1352 on my 95 mustang 3.8L which burns rich, constantly fouling spark plugs #2 and 6, horrible gas milage, occasional knock sound, loss of power accelerating, hesitation until rpms rise, lare shifting, rmps winding out but no power to climb a hill, after achieving a speed around 25mph the listed symptoms disappear until hwy speeds met and obvious misfires and shaking occur. I do have a defective ignition switch causing my door chime to go off until i adjust the rabbit esrs just right and when battery goes low a weird sound can be distantly heard. Helppp! Thx everybody

did you ever get your truck fixed? i had a 2007 ford e450 same thing replaced ign switch under steering colum an also the ign key lock cylinder works runs drives chk these if you have already fixed