Due to the general nature and the widely different applications of code B1342 between manufacturers, the information in this guide is presented for general informational purposes only. As such, the information presented here should NOT be seen as exhaustive and/or definitive with regard to any diagnostic procedure that involves this code. Always consult the manual for the application being worked on for accurate and relevant information on code B1342 as it applies to that particular application. END OF SPECIAL NOTES.

OBD II fault code B1342 is most commonly defined as “ECU (Electronic Control Unit) has failed”, or sometimes as “GEM (Generic Control Module) has failed”. Note that there are other definitions with slightly different wording but regardless of the actual wording of the definition, this code refers to the failure of one or more control modules, as opposed to a general failure of, or in, the CAN Bus (Controller Area Network) wiring.

On some applications, many functions that do not affect engine/fuel/transmission management are performed/monitored/executed by the PCM, while on others, a generic electronic control module oversees/manages/controls all functions that do not involve engine and fuel management. While the end result, which is the management of all electronic and control functions is the same in all cases, the practical aspects of diagnosing and repairing code B1342 depends entirely on whether any given application is fitted with a generic control module or a centrally located PCM.

Control modules that are covered by code B1342 vary between applications, but the most common modules include the following-

Note that the above list includes only modules that affect safety and driveability. Some applications can have as many as 18 or more modules that control anything from power window operation to seat adjustment to navigation and infotainment systems. The actual number of control modules on any given application depends on the make and model, but code B1342 generally applies to all body control issues on all applications.

The image below shows the typical systems and/or controllers that are covered by code B1342. 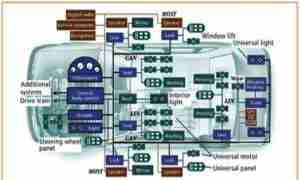 What are the common causes of code B1342?

By far the most common cause of code B1342 is abnormal system voltages that can damage controllers, with damaged, burnt, shorted, and/or corroded wiring and connectors following close behind.

Other causes are mostly make-and-model specific, but it is worth noting that aftermarket accessories such as head light conversion kits and audio systems (and the shoddy installation of many other aftermarket electrical accessories), can have unpredictable effects on a wide range of control modules on almost any application.

Symptoms of code B1342 are mostly make-and-model specific, as are diagnostic and repair procedures. However, the most common symptom of this code across all applications is the presence of one or more illuminated warning lights, depending on which circuits/control modules are affected.

NOTE: Code B1342 rarely causes serious driveability issues, although the loss of power assistance to the steering, or the ABS function on brake systems can make driving some vehicles dangerous in some conditions. Also, note that where SRS (airbag) controllers and sensors are involved, the airbags may not deploy in a crash, or the airbags may deploy unexpectedly even if the vehicle is not involved in a crash.

How do you troubleshoot code B1342?

WARNING: Generic code readers can often not communicate with the CAN Bus system, meaning that diagnosing and repairing code B1342 is NOT recommended for non-professional mechanics. Diagnosing this code requires professional grade equipment, above average knowledge of automotive diagnostics in general and expert level knowledge of the application being worked on in particular.

NOTE #1: Code B1342 is often accompanied by several other codes, which may or may not be related to the system or controller under investigation. Be aware that some issues, such as defective batteries and/or alternators that cause abnormal system voltages can set codes that may not be directly linked to B1342. For this reason, it is important NOT to start replacing components and/or control modules before making a distinction between codes that are the result of charging system failures, and those that are directly linked to the possible causes of B1342.

NOTE #2: In some cases, code B1342 does not specifically refer to any particular controller. Instead, the code definition as displayed on the scanner might refer to a system such as the ABS, air bags, or electronic power steering. In these cases, the fault is more likely to involve either the controller itself or a loss of communication between the controller and one or more components in the system indicated, rather than to a simple component failure.

NOTE #3: Due to the large differences in how code B1342 is applied between manufacturers, it is not possible to provide detailed troubleshooting and diagnostic information that applies to all, or even most applications for this code here. Some causes of this code are more prevalent than others, and one particular cause may affect some applications/systems/controllers differently. Therefore, the information provided here should not be seen as anything other than guiding principles that should suffice to resolve at least some instances of code B1342

NOTE: Checking the system voltage and the condition/operation of the charging system components should always be the first step when diagnosing B1342. Be aware that abnormal system voltages can set random codes, so always investigate, and resolve codes in the order in which they were set and stored. Failure to follow this rule will almost certainly result in a misdiagnosis, wasted time, and possible secondary damage caused by improper diagnostic procedures/methods.

NOTE: Be aware that it might be necessary to remove carpets, seats, trim panels, and parts f the dashboard to gain access to all ground connections.

NOTE: Do not assume that connectors are passing current. Even connectors that appear to be in perfect condition can cause open circuits, so separate all connectors and physically check the condition of all pins and terminals in both halves of the connector. However, resist the temptation to repair connectors; the better option is always to replace wiring between connectors with OEM harnesses to prevent issues with high resistances across repair sites.

Clear all codes after repairs are complete, and retest the system to see if any codes return. At this point, it might be necessary to complete one or more drive cycles to reset some controllers; consult the manual on the effects of disconnecting wiring and control modules, and follow the directions provided to ensure that all control modules are fully integrated into the CAN Bus system.

If code B1342, or for that matter, any other codes persist, there are two possible courses of action. The first option is to refer the vehicle for professional diagnosis and repair: the second option involves testing hundreds, if not thousands of circuits individually for resistance, ground, input voltage, and continuity.

WARNING: This is a monumental task that can take several days, with no guarantee of a successful resolution. Nonetheless, codes of this type are more often caused by wiring issues than control module failure, meaning that even if suspect modules, or control modules that are known to be damaged are replaced, unresolved wiring issues can, and probably will damage the replacement modules in short order.

Diagnostic and/or repair procedures beyond Step 5 depend entirely on the level of skill of the mechanic on the one hand, and the capabilities of the equipment at the mechanic’s disposal, on the other. While specialist technicians with advanced equipment and expert knowledge of automotive diagnostics might be able to resolve the root causes of code B1342, non-professional mechanics are strongly advised to refer the vehicle for professional diagnosis and repair at this point.

WARNING: One misplaced probe on the wrong pin at the wrong time can cause severe, if not fatal damage to the rest of the vehicle’s electrical system, so do NOT attempt a diagnosis of B1342 unless you have a complete understanding of each circuit you are testing.

Although code B1342 refers to failed electronic control modules on almost all applications, there are no codes that are directly related to it. Note though that this code can refer to one or more control modules, but exactly which modules are indicated depends on the application. Below are some examples-

BAT Team Discussions for B1342

My 2007 F-150 4×4 is showing both ABS and Brake lights on dash, I replaced all rotors, speed sensors (both front and on rear differential) , calibers, pads and flushed the whole system to include the Master cylinder with new fluid. Because my code reader doesn’t have an ABS feature I took it into Tires Plus they also works on brakes, there code reader shows a C1432 ABS control module ECU failure. I’ve seen rebuilt control modules for that year and model. But I’ve poured so much money into what I have done, is there any other things I can check before purchasing and having Ford reprogram a control module?