OBD II fault code B1318 is a manufacturer specific code that is defined by carmakers Ford and Jaguar as “Battery voltage low”, and is set when the PCM (Powertrain Control Module) detects that the battery voltage has fallen below a predefined level.

While modern automotive electronics are designed to work optimally when the battery voltage is at its specified value, most electronic components/systems have the ability to operate normally at voltages that are far below the optimum battery voltage. For instance, while starter motors work best when the battery is fully charged, most starter motors are designed to deliver their rated power (torque) at only 8-10 volts.

Nonetheless, most electrical /electronic systems and components also have minimum operating voltages below which they simply will not work. For instance, the starter motor solenoid requires a minimum voltage to overcome the tension of a spring to be able to close a circuit, while fuel pumps on return less fuel systems require a minimum voltage to be able to spin fast enough to deliver the minimum required fuel pressure to start the engine.

However, many electronic systems also require minimum battery voltages to function properly even when the ignition is switched off. These include, but are not limited to, the anti-theft/security system, as well as the PCM to maintain the KAM (Keep Alive Memory) circuits, which contains information on the idling speed and other basic engine operating data.

As a practical matter however, there is little point in the PCM setting this code after the battery voltage has fallen to below a level where critical electronic systems have stopped working. Therefore, in a fully functional system, the PCM will generally set this code and illuminate a warning light when the battery voltage approaches the critical, minimum level either when the ignition is switched on, or during normal operation of the vehicle.

Where is the B1318 sensor located? 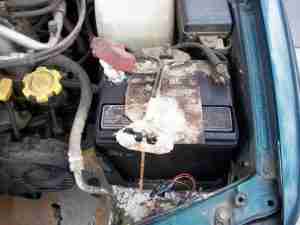 The image above shows a poorly maintained battery, on which excessive corrosion of the terminals is a likely cause of a low stored voltage. However, be aware that the actual cause of a short circuit or battery drain can be located almost anywhere in the electrical system.

What are the common causes of code B1318?

Note that while a defective battery is a common cause of this code, a damaged or defective battery is often only a symptom of a problem elsewhere in the electrical system. For this reason, it is important to have the charging system tested thoroughly by suitably qualified technicians when the battery is found to be defective. Moreover, if the charging system is found to be fully functional, it is important to find and repair the source of any drains on the battery before the vehicle is placed back into service to prevent a recurrence of this code and its associated symptoms.

Nonetheless, some common causes of code B1318 could include the following-

NOTE: Code B1318 is also used by car maker GM, who defines this code as “LH Sun Load Sensor Fault”. In this definition, the code refers to a fault in a sensor that measures the intensity of sunlight falling on the dashboard, which information is used to make automatic adjustments to the output of the A/C blower.

BAT Team Discussions for B1318

None found. Ask a question about B1318.
4 2 votes
Article Rating
Subscribe
Login

I have a Lincoln Navigator 05 I have a lot of accessories like internal ambient light sound system with its own battery independent and I have a stock 110amp alternator I have a 300amp altenator if I replace that will take care of this error code ?